Dalton Kendall, 17, and Kyle Richardson, 16, both of Lafayette, died Wednesday morning in a crash on Tippecanoe County Road 100 North after their speeding car left the road and struck a tree, seen on the left. Quinton Crabtree, 16, of Lafayette, was critically injured. All three were Harrison High School students. (Photo: Ron WIlkins/Journal & Courier)

LAFAYETTE — Seventeen-year-old Dalton Kendall was the driver of the black Nissan Altima that crashed into a tree, splitting the car into three pieces and killing himself and his passenger, 16-year-old Kyle Richardson, according to Tippecanoe County Coroner Donna Avolt and the sheriff’s office.

The Nissan Kendall drove was registered to an adult family member of Kendall, Avolt said.

Kendall and Richardson died from multiple blunt force trauma from the crash, Avolt said of the preliminary autopsy results.

Deputies responding to the crash at 8:15 a.m. Wednesday arrived to find Kendall and Richardson dead at the scene.

Backseat passenger Quinton Crabtree, 16, of Lafayette, was in critical condition. He was taken to IU Health Arnett Hospital, where he was stabilized and later transferred to Methodist Hospital in Indianapolis, Tippecanoe County sheriff’s Lt. Brian Lowe said Wednesday afternoon.

Crabtree was listed Thursday in critical condition, according to the sheriff’s office news release published about 11:30 a.m. Thursday.

The three boys were students at Harrison High School, and the school day started about 45 minutes before the crash, Lowe said Thursday morning. It is not clear if the boys were supposed to be in class, he said, noting they might have had a later start time.

Kendall drove east on County Road 100 North at a very high speed, Lowe said, citing witnesses’ statements. He noted that accident reconstruction specialists have not yet quantified the specific speed.

Kendall lost control of the Altima after it crested the hill just west of County Road 675 East, according to the sheriff’s office.

The car sped off the left side of the road and slammed into a tree. The impact split the car into three pieces.

Kendall and Richardson were found inside the car, and Crabtree was found outside of it, according to the sheriff’s office news release published Wednesday.

Although it was snowing at the time of the crash, investigators found that the roads were wet, but not icy or snow-covered, according to the sheriff’s office.

Safety tips: 10 things to do if you’re involved in a crash

Deadly crashes: 2018 was third-deadliest of the decade on American roads, NHTSA says

Principal Cory Marshall said Wednesday that administrators called in additional school counselors to help students who might be struggling with the news. 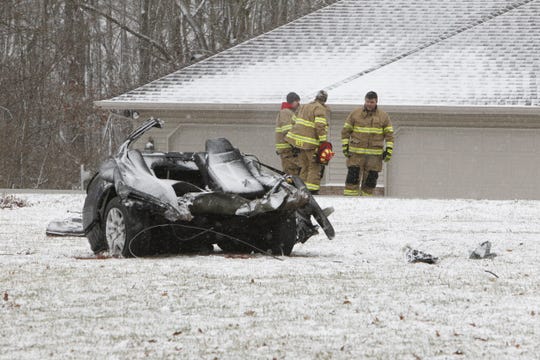 This is one of three pieces of a Nissan Altima that was eastbound on County Road 100 North at a high rate of speed about 8:15 a.m. Wednesday, Feb. 26, 2020. The driver, Dalton Kendall, 17, lost control of the car east of County Road 675 East. The car that split in three pieces after it struck tree on the northside of the road. Dalton and his passenger, Kyle Richardson, 16, died in the crash. Another passenger, Quinton Crabtree, 16, was critically injured. All three were Harrison High School students. (Photo: Ron WIlkins/Journal & Courier)

“We are heartbroken and saddened to hear about the crash that involved three Harrison students,” Marshall said Wednesday in a news release. “On behalf of the school, we send our deepest condolences to the families involved.”

4 killed as train collides with auto-rickshaw in Rangpur

“Flushable” Wipes Not So Flushable